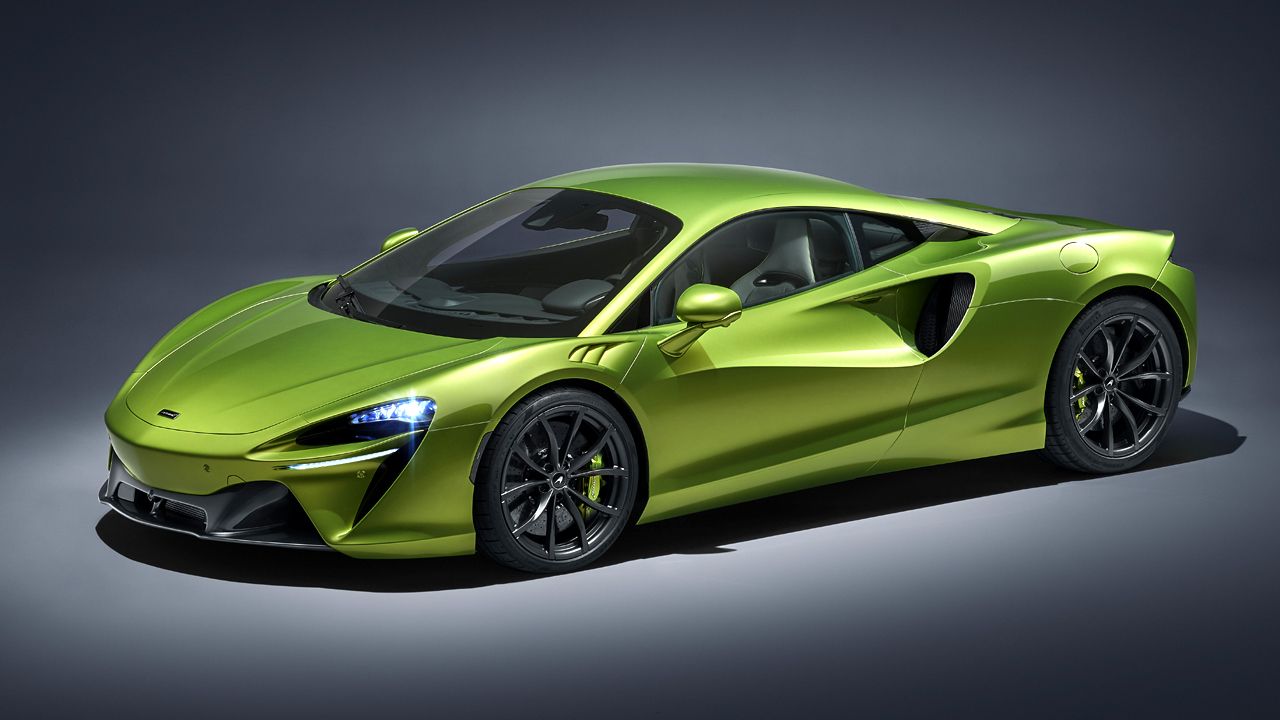 Since the launch of P1, this is the first time that McLaren has made a comeback to the world of hybrid vehicles with the model Artura. Although it shares a lot of similarities with McLaren’s Sports Series, it still looks like a new supercar for a number of reasons. It comes with a fresh twin-turbo V6 engine and a powerful electric motor. Let’s find out more about this amazing supercar. Read on to find out more.

As announced earlier, the Artura features a fresh carbon-fiber tub and a number of other new chassis parts. Apart from this, the rear suspension has also received a lot of changes. But what makes the hybrid car different is the hybrid twin-turbo 3-liter V6.

The special thing about the engine is that it’s an angle of 12 degrees with a turbo in the shape of V. There is a dry-sump oil mechanism as well as a redline of 8,500 RPM. Also, it weighs 110 pounds less than the regular V8s of McLaren.

As far as the power generation is concerned, the car generates a torque of 431 pound-feet and horsepower of 577. Besides, the engine is paired with a powerful electric motor that can produce up to 94 horsepower. The combined power of the engine and the electric power is 531-pound-feet torque and 671 horsepower. Also, the motor can make up for the lack of torque when the RPM is low. This allows a much better throttle response.

The battery is powerful enough as it provides up to 7.4kWh. Even if you use the motor to drive your car, you can go up to 19 miles before you need to recharge the unit. The motor and engine come with an 8-speed double-clutch automatic transmission. And the good thing is that it has no reverse gear, which makes the transmission lighter and smaller. And power is transmitted to the back wheels.

Despite the fact that the Artura comes with a heavy better and an electric motor, the vehicle only weighs around 3,305 pounds. The engine is powerful and lightweight, which is why you can hit 60mph in just 3 seconds. The top speed of the vehicle is 205 mph.

We can’t just rely on performance and the engineers behind McLaren knew the fact. The interior of the car speaks volumes about why you should go for it. The car has an organic design, especially for the screen you can see. Both the steering column and the screen are connected. Therefore, the screen moves when you move the steering wheel.

On the right side, you have a 9-inch crystal clear infotainment screen that features a crown-shaped control dial. Also, the interior features a lot of modern amenities like high-beam headlights, lane-departure warning, adaptive cruise control, Android Auto, and Apple CarPlay.

The Artura will be available for purchase during this year’s third quarter. The base price is set at $225,000. You will be able to choose from four trims: Vision, TechLux and Performance, and the base model.

In short, this was an introduction to McLaren Artura, which is one of the best hybrid supercars.

At Apex Auto Garage, you can hire the best McLaren service Dubai. So, if you are looking for a good service, you can contact them for Mclaren repair Dubai.

Tips to Maintain Your Bentley’s Engine

Although many drivers don’t have their vehicle serviced on a regular basis, it should be their priority. Ongoing maintenance of the engine offers a lot of benefits. As far as the engine of Bentley is concerned, it is known for its high performance. This is the reason this engine requires a higher level of maintenance […]

MC20 is the upcoming vehicle by Maserati. This is an innovative sports car and uses the latest technological advancement, such as the Bilstein DampTronic X suspension system. The company has been working on a brand new strategy in order to introduce a flagship supercar. In this article, we are going to find out why you […]

To schedule an appointment with Apex Auto Garage, fill out the below form with your information and requested services. One of our team members will get back to you as soon as possible to confirm your appointment.